Today I want to show you some experimenting I’ve been doing with brush lettering, plus I have some free Christmas printables for you! 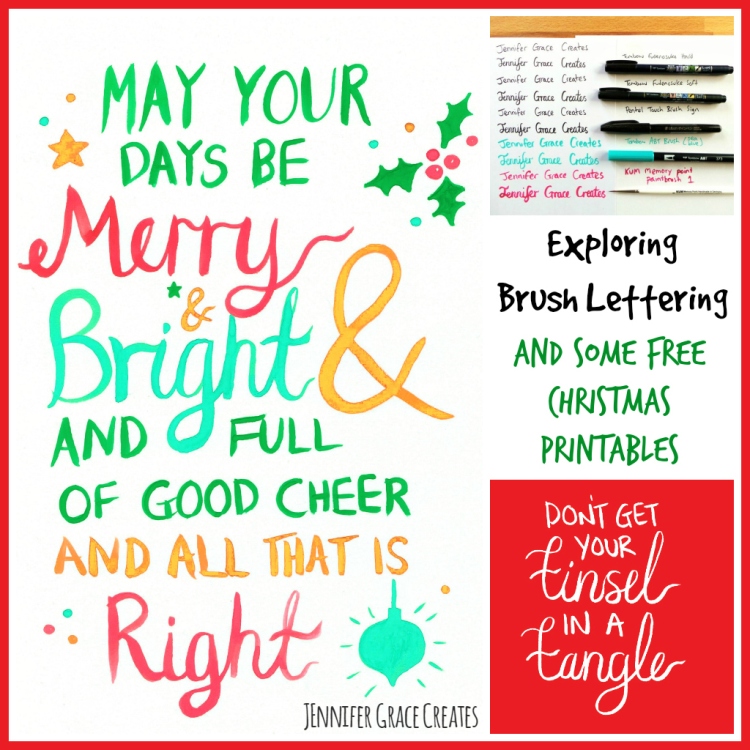 I’ve been wanting to have a proper go at brush lettering for a while. If you follow me on Instagram you may have seen THIS PHOTO which I took a couple of months ago, trying to be a beta tester for a Molly Jacques Workshop on calligraphy and lettering. I wasn’t lucky enough to get chosen – no wonder as there was stiff competition! But that didn’t curb my interest. I have been devouring You Tube videos on brush lettering, like THIS ONE by Amy Tangerine, and THIS ONE by Kristina Werner, and I’ve been dreaming about taking THIS CLASS with Jen Schow, which I’m sure I will once I have more time!

In the meantime I searched around for some recommendations on pens / brushes for beginners to use, and that were not too expensive! I ended up buying Tombow Fudenosuke Pens in Hard and Soft, a Tombow Art Brush Pen in Sea Green, a Pentel Touch Brush Sign Pen, and a KUM Memory Point Paintbrush in Size 1: 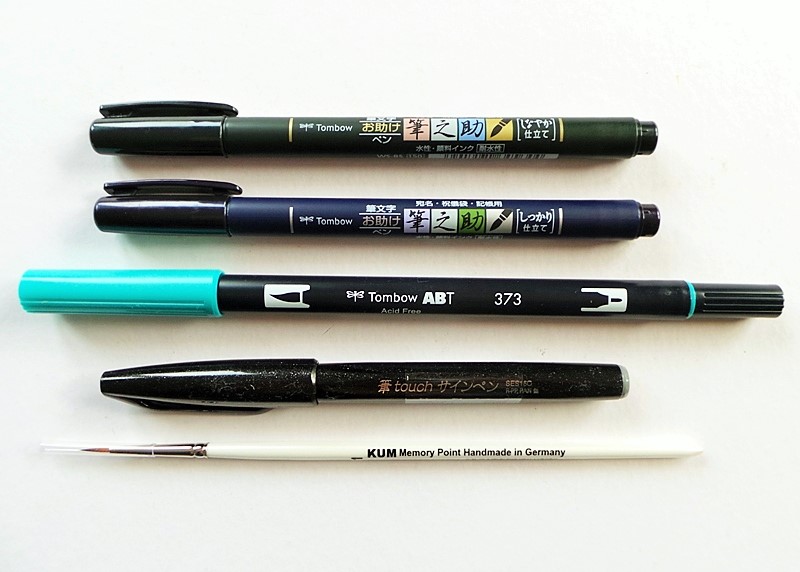 My first trial was to write my blog name with each pen / brush. First I wrote it with my everyday non-joined up handwriting, then I attempted a more brush script style underneath: 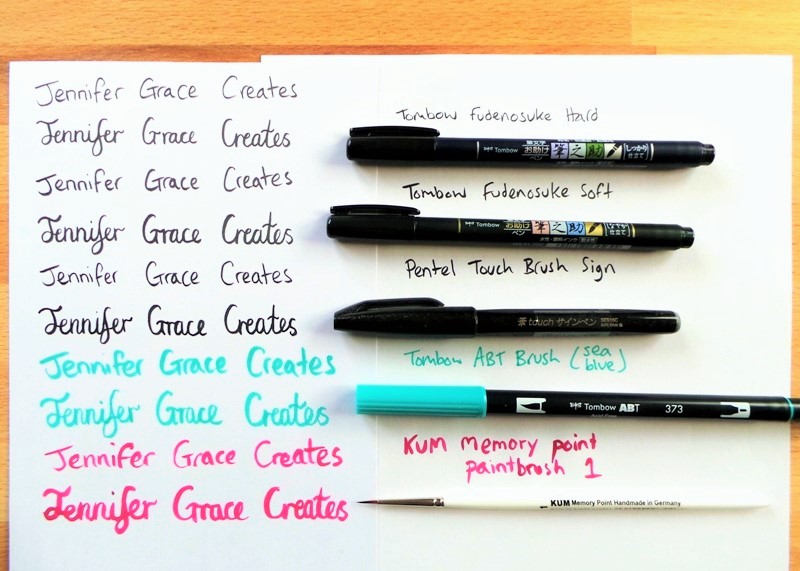 I know from watching the videos mentioned above that one of the things to remember is to press down on the down-strokes, and lift up for a lighter line on the up-strokes, so I did that as best as I could. I’m sure that’s something I’ll get better at with lots more practice!

My next idea was to create a phrase, with a mix of writing styles – some of it being bold and straight, some being twirly and script-like. I wrote ‘Don’t get your tinsel in a tangle’ several times, each time improving my technique slightly – thinking about how close together the words were, and how to accentuate the two different writing styles: 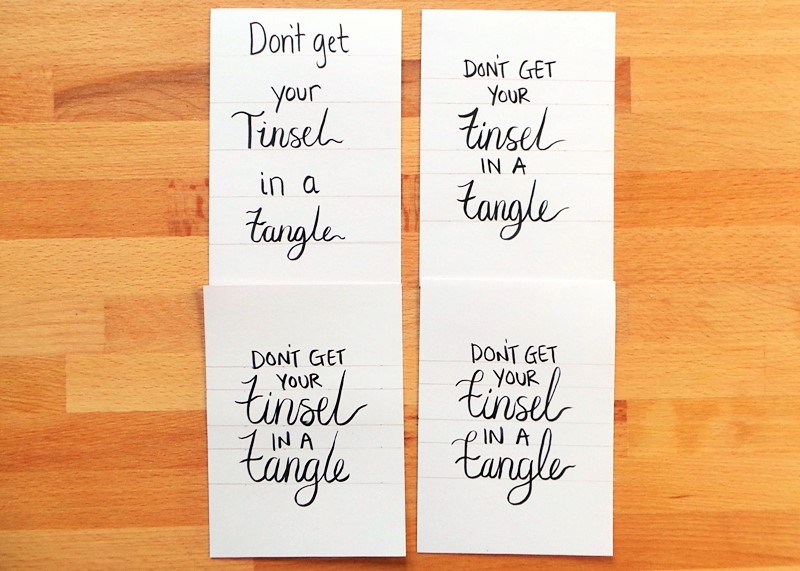 It was fun to see how much my writing changed just by doing the same phrase several times!

Next I used the thin paintbrush to paint a merry poster which says ‘May your days be merry and bright, full of good cheer and all that is right’: 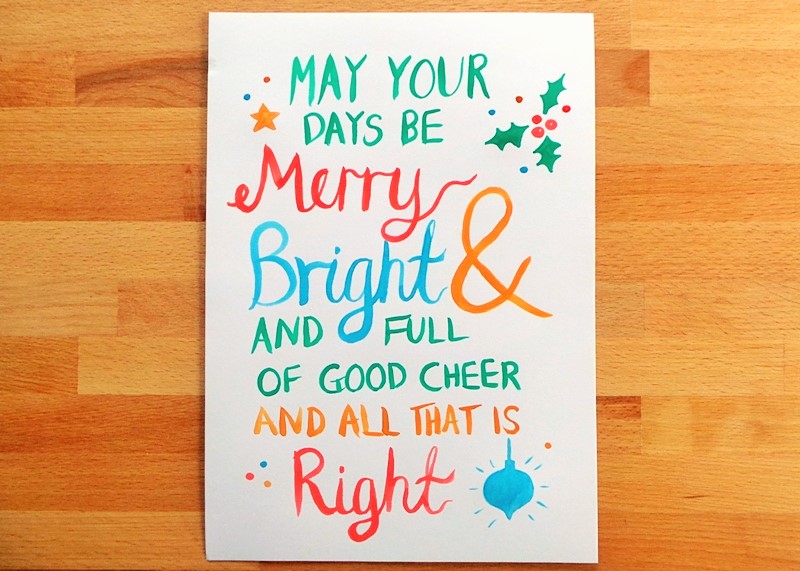 I was pretty happy with it as a first attempt, though I did realise afterwards that the large ampersand was in the wrong place – I should have practiced the layout on a spare piece of paper first. After I took the above photo I ended up going back and adding a smaller ampersand between the words merry and bright – I’m pretending the large one is decorative only!

I tried out a couple more phrases on the spare pieces of card which I had: 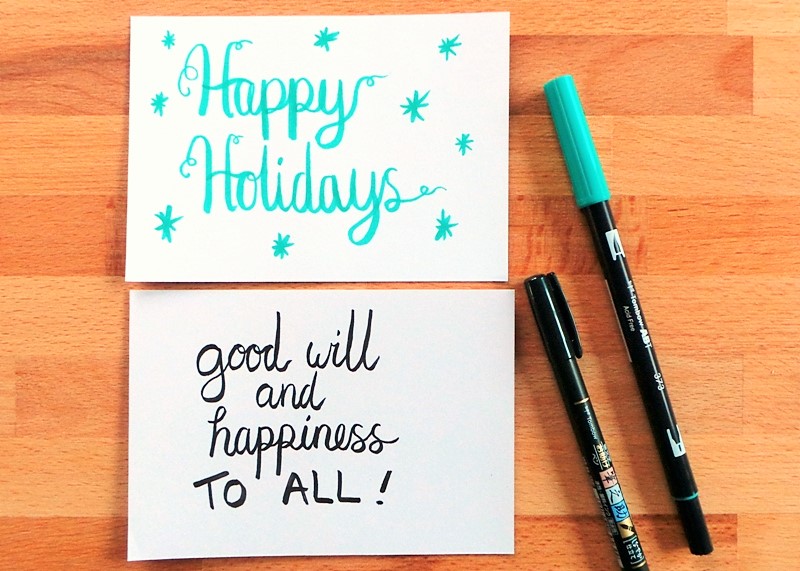 For all of these I was just writing on cheap white card which I buy from Poundland – I think you get 30 sheets for £1 and it’s pretty good quality.

That’s all the experimenting I’ve done so far, but I can’t wait to practice a bit more and hone my style.

I scanned in all the items I ended up with, so that you can use them as printables if you wish (personal use / gifts for friends only please!). Click HERE to download the PDF poster (you will be prompted to download, it doesn’t happen automatically). 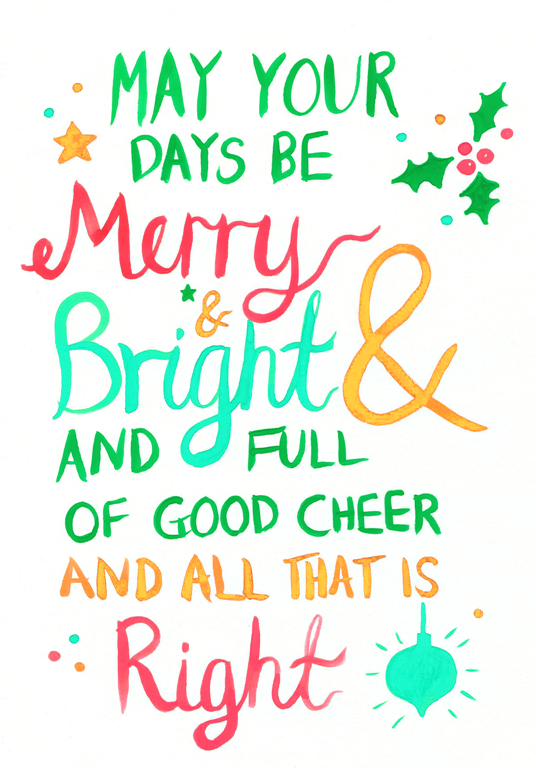 And the smaller phrases are below – I played around with re-colouring a couple of them in Photoshop, which is another thing I need to practice more! Click HERE to download the PDF for these! 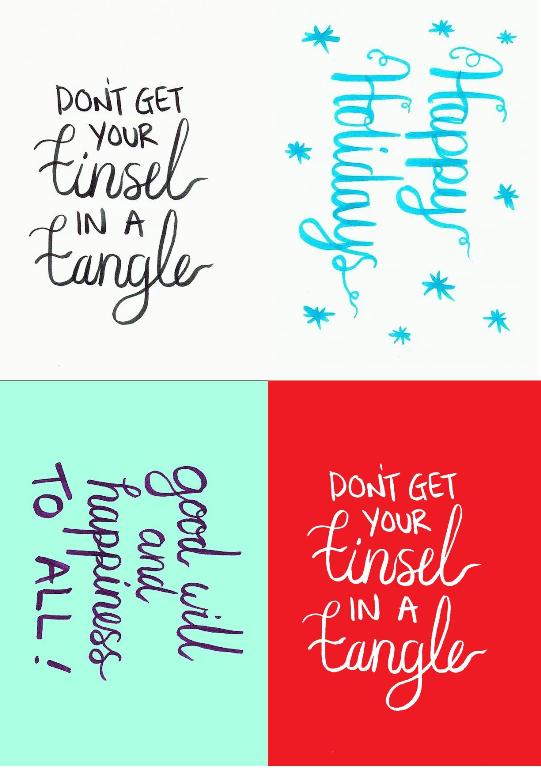 The white-on-red ‘tinsel in a tangle’ is my favourite!

Do some hand-lettering on your next project

Do you like the printables? What would you use them for?

17 thoughts on “Exploring Brush Lettering – and some Free Christmas Printables!”