Today I’m sharing this Christmas Hugs Card, featuring 2 snow-people who can’t wait to break free from their snow globes and give each other some Christmas cuddles:

This was partly inspired by the new John Lewis Christmas advert, where a little girl tries to send a gift to a lonely man that lives on the moon. I still haven’t decided how much I like the advert, but I think the sentiment is sweet – that even if you won’t see someone soon it’s good to know you are thinking of them in the run up to Christmas. So I came up with the idea to have 2 characters that couldn’t quite reach each other for a hug, but you obviously hope they will soon!

Here’s how I put the card together…

Step 1: Use the Lawn Fawn ‘Ready, Set, Snow’ stamp set to stamp a snow globe onto some snowy looking paper (I used Lawn Fawn ‘Let’s Bokeh In The Snow’ 6×6 pad):

Step 2: Fussy-cut around the snow globe, cut it in half, and ink the edges with more black ink:

Step 4: Print out the sentiment ‘I can’t wait to give you Christmas hugs’ or find a similar sentiment in your stamp stash. I used the ‘Amatic’ font for mine:

Step 5: Layer some more papers onto a card blank, stick your snow-people and sentiment onto the snow globes, and place them on top of the papers without sticking the snow globes or the ‘Christmas Hugs’ sentiment down yet – you just need to check where they will be going. Then you can stamp some tiny little hearts (I used one from the Lawn Fawn ‘Flirty Frames’ stamp set) as though they are floating up from the snow-people:

Step 6: Once the hearts are stamped you can stick on the ‘Christmas Hugs’ sentiment and the snow globes, using foam tape or dots to give the card more dimension. Then add a few gems or metallic pearls if you want to: 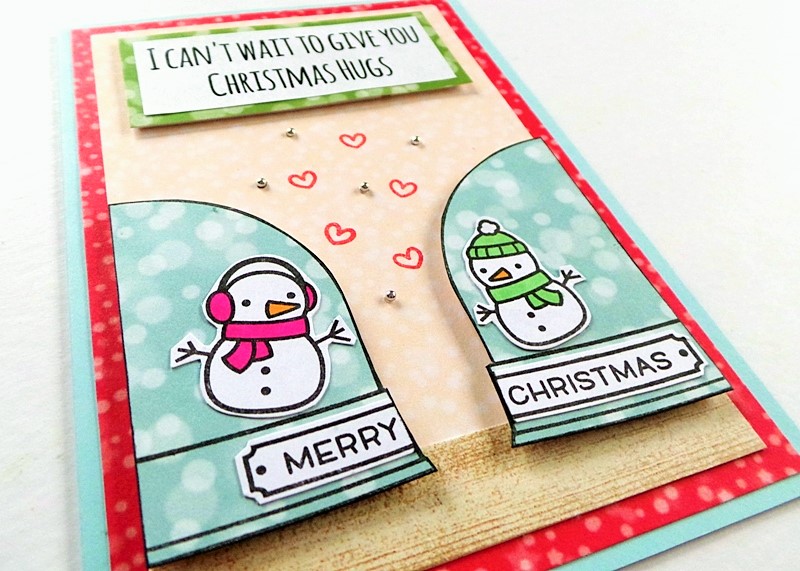 The card is finished and ready to send to someone you love but don’t get to see very often!

Use the words ‘Christmas Hugs’ on a card, layout, or other project

What do you think , do you like the card, or do you feel too sad that the snow-people can’t reach each other?! I think I will stamp them on the inside of the card too, all snuggled up this time!

I’ll be back tomorrow morning at 8am GMT with the next Frosty Festivities project.

Hello! Today I’m sharing these lovely Christmas Village Candle Houses. I’ve called this a kids craft as my children made these, but I’m sure grown-ups will enjoy making them as well – I’m certainly tempted to make a few of my own!

I do want to point out straight away that these are for LED candles – the battery powered, flameless, kind. DO NOT put normal candles in these as you will start a fire – those roofs would burn up nicely.

That’s the safety message out of the way!

My kids had great fun making these and now they want to play with them, but I’m trying to keep them out of their reach so we can have them on display at Christmas. I know they will become a toy as soon as Christmas day has passed though, so you could always just make these as toy houses instead of candle ones. I just want to have a Christmas village to display this year!

If you want to make some of your own, here’s how to create them…

Step 1: Find some cardboard tubes, cut them to the size you want your houses to be, and make some initial holes for where the windows will be, to help you get your scissors in. I did all of this step before the kids came to the table, as I knew the card would be too tough for them to get their scissors through without a starting hole. I used a Big Shot to punch the initial holes:

You could also use a paper piercer or sharp scissors to make those first cuts, just be careful not to pierce your hands – you could put a lump of blue tack or playdoh at the back of the place where you are going to make the hole, to give you something to press onto.

Step 2: Call the kids in, if you are doing this with kids who can use scissors, and put them to work making the windows larger. I wasn’t expecting Cheeky Boy (age 4) to be able to do much, but he came up with an amazing star-shaped design, that obviously isn’t neat and tidy, but it let the light out and it’s all his own work. Look how much they were both concentrating:

Step 3: You can do this bit later, but I wanted to get it out of the way before we got messy, and I thought it might help with the next step – choose which papers you will use for your roofs:

Step 4: Start painting your houses. I thought we’d paint depending on what colour the roofs would be, but the kids found it more fun to paint what they wanted and then decide which roof would go on which house later. I let them go with the flow. Make sure you protect your work surface and wear aprons, if you want to. I did neither because our table is too covered in stains to worry about, and I couldn’t find the aprons! We used kids craft paint so it washes off easily anyway:

We painted most houses with one coat of paint, except white which needed 2 coats. Actually it probably needed 3 coats but the kids didn’t want to paint them again!

Step 5: While the paint is drying (which could take all night depending on your paint) you can prepare the roofs. Our circles were 10cm (4″) in diameter, I got the kids to draw around some Ikea cork coasters of that size, onto the back of the papers they’d chosen for their roofs:

Cheeky boy’s circles were way out. Below you can see one of his circles on the left, and one I’d helped him to correct on the right. At least he was having a go:

Step 6: Cut your circles out, then cut a piece-of-pie styled chunk out of them (it doesn’t need to be a certain measurement, just eye-ball it). Cheeky boy also can’t cut in circles. The blue one second from left was one he’d cut, and it was too small, so I re-cut a blue one for him, and a red one. The one on the bottom left, which looks white (but is green patterned paper on the other side) he’d managed to cut outside of the circle, in a very jagged way, so I left that one as it was. I cut the pie-pieces out for him after I took this photo too. Little Miss did it all herself, after I showed her an example of the pie-piece: 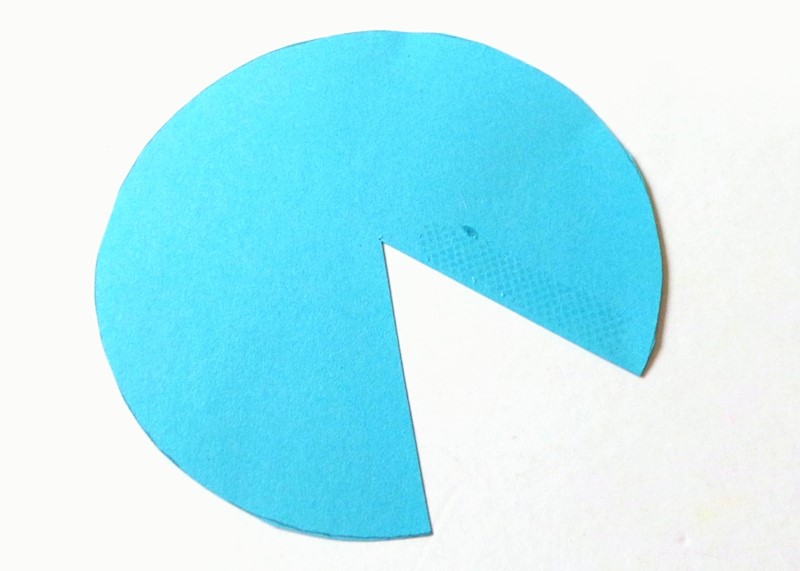 Step 8: Bend the roof into a wide cone shape and stick the edges down. There will be a bit sticking out as we didn’t measure the pie-piece hole: 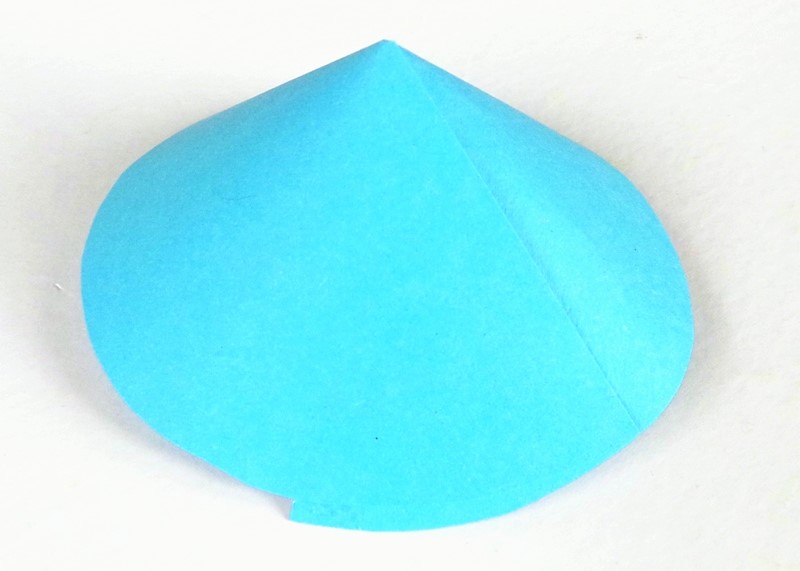 Cheeky Boy put the adhesive on his roofs but I did the bending and sticking.

Once the houses are all dry…

Step 9: Stick the roofs on. I used a hot glue gun, just dotting a few blobs at the top of the house before pressing the roof on. Tacky glue would work too, but I wanted it to dry fast:

Step 10: Draw on some details. I actually left the room and went to do some housework while the kids did this bit, as if I’d stayed in the room I would have kept telling them to keep it neat and make it Christmassy, but really I wanted them to have fun and be creative. So I left them too it. Of course I did come back to find they’d got Sharpie pen marks on their clothes, but they had drawn some fabulous designs too:

Hopefully the Sharpie marks will come out after a few washes!

Step 11: The final step is to blob on some tacky glue, around the edges of the roofs, and the bases of the houses, or wherever you want, then tip on some white glitter. This is the step that makes them look like Christmas village houses. Then you just need to pop an LED candle inside, and sit back to admire the glow:

In the above photo you can also see how Cheeky Boy cut a door in one of his houses, when I wasn’t looking. It means you can see the candle inside, but not if you turn it around the other way!

Make a Christmas village house, or other Christmas decoration or embellishment, out of a cardboard tube

Cut or punch some star shapes

Would you like to live in one of these cosy little houses?!

I’ll be back tomorrow morning at 8am GMT!

This one is sponsored by the awesome online shop The Paperdashery…

The Paperdashery is a relatively new shop, started by Gude from the Hodge Podge Craft blog – I was reading her blog when I discovered the shop! The Paperdashery is full of pretty twine, washi tape, wrapping paper, gift cards, and more! There’s even a handy ‘Christmas’ category which you can search HERE.

I immediately bought some twine and washi tapes when I discovered the shop, and I will be back later today to show you a project using them! 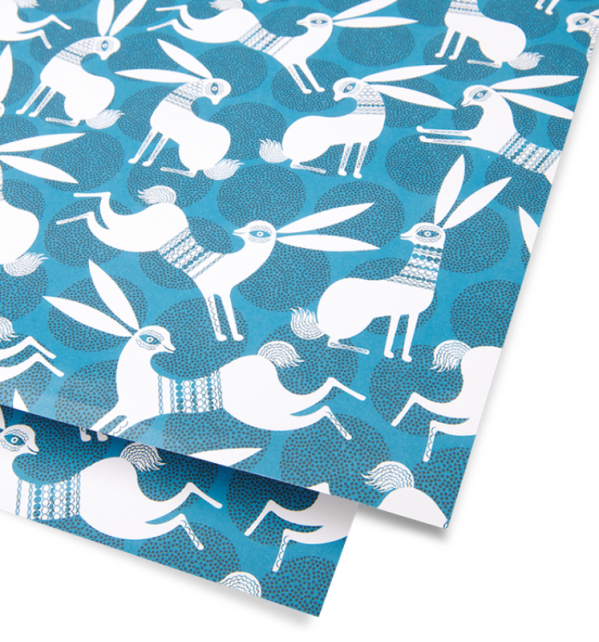 3. Maste Christmas Washi Tape, Knit Pattern – What can I say? This tape is perfect for conjuring up the atmosphere of winter days – going out for walks wrapped up in bobble hats and mittens:

Do they get you in the mood for winter or Christmas?!

Now for the giveaway…

One winner will receive a £10 GBP voucher code to spend in the Christmas category of The Paperdashery, with free delivery of the items you choose too!

To enter the giveaway {NOW CLOSED}: Just pop over to The Paperdashery Shop, take a look around, and come back here to leave a comment, telling me about an item or two that caught your eye (it doesn’t need to be Christmas or Winter related, just anything you like).

You could also pop by The Paperdashery’s blog and social media pages. It’s not compulsory to visit these to enter the prize, but obviously Gude would love it if you stopped by. Make sure you tell her ‘thanks’ for sponsoring a giveaway prize! Here’s the links:

The giveaway closes at 10pm GMT on Sunday the 6th of December 2015. {NOW CLOSED} It is open internationally. The winner will be announced here on Thursday the 10th of December, so make sure you check back to see if you won.

Good luck! I’ll see you again at 4pm to share a project I made with washi tape and twine from The Paperdashery!